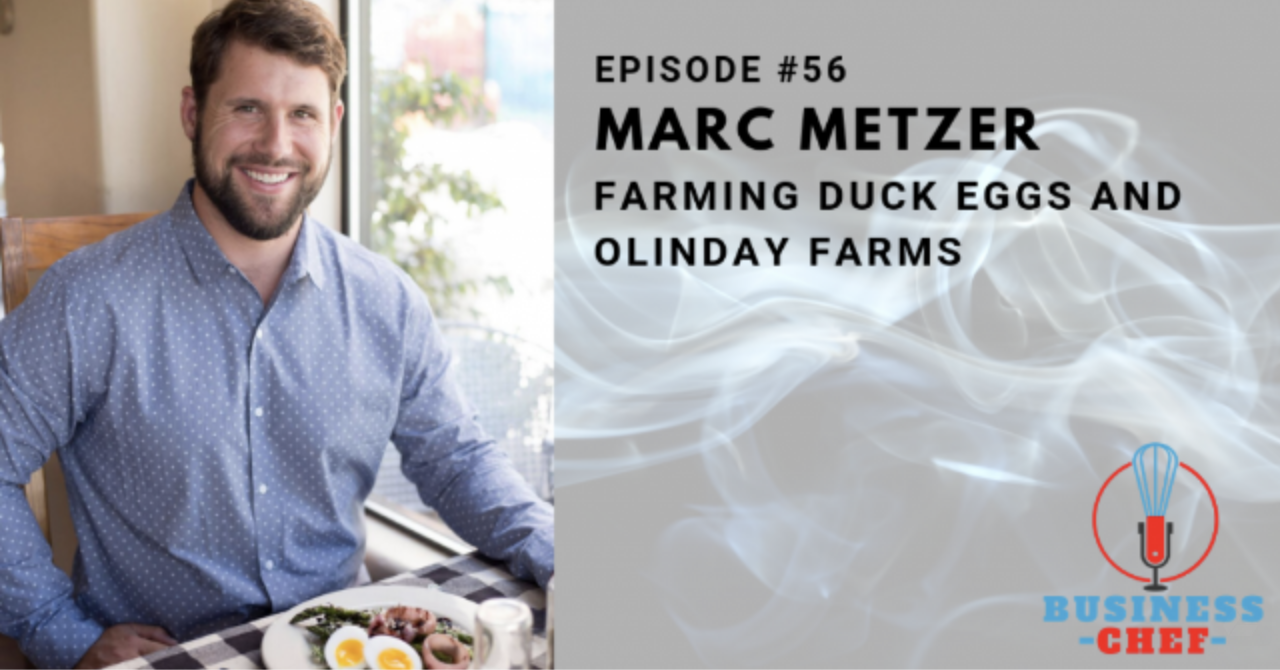 His work has been recognized nationwide as well as being a regular contributor to numerous food service publications and outlets and is the recipient of numerous awards-most recently the 2015 Culinary Educator of the Year through the local American Culinary Federation’s chapter-Beehive State Chef’s Association. He the owner of multiple food service businesses and currently the host of the Business Chef Podcast. 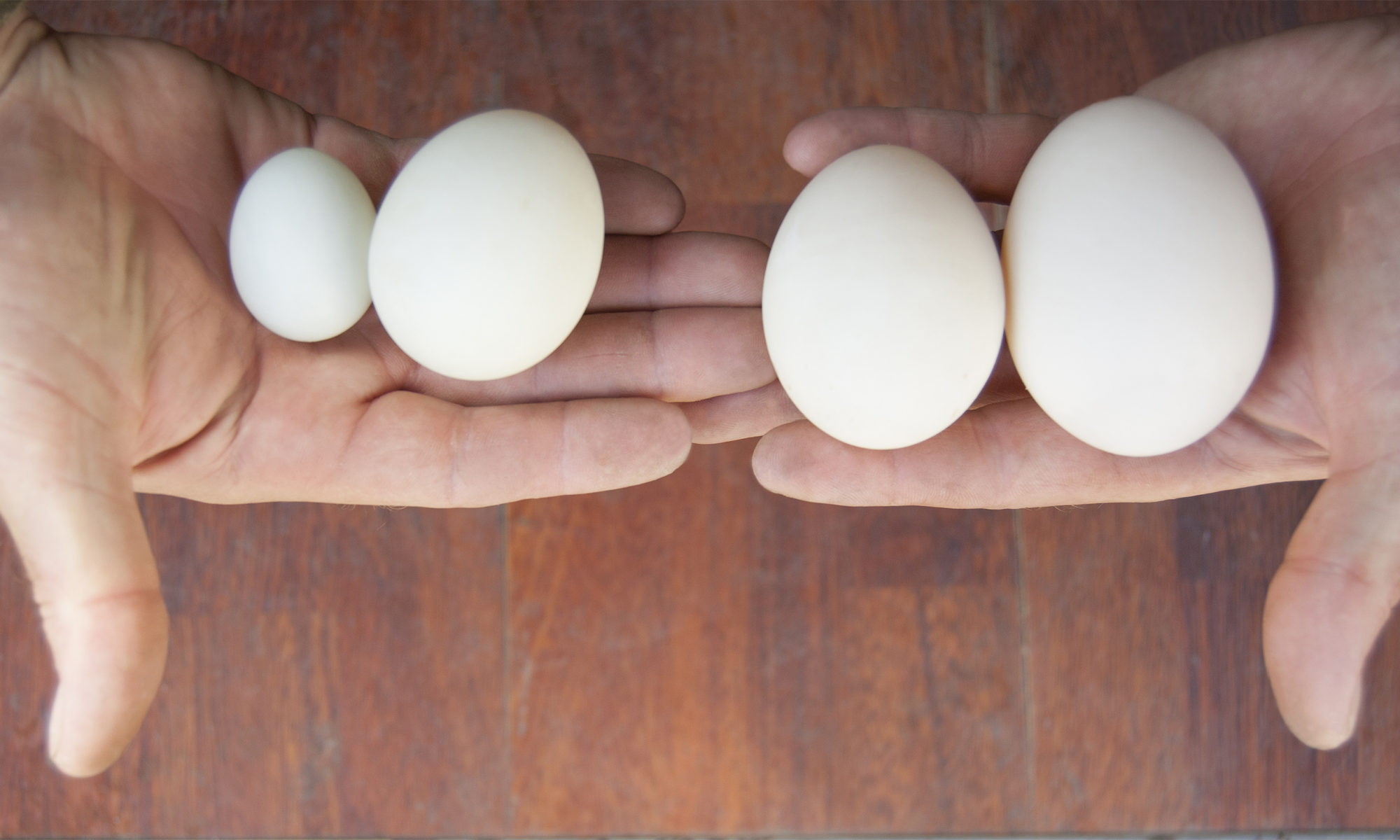 Marc Metzer is now the egg man. After a crack at the corporate world, his entry into his family’s third-generation waterfowl hatchery at Metzer Farms in Gonzales has him happily singing a quirky tune.

And we are all together

You can tack on a “goo goo g’joob” for good measure.

“Farming is something I’ve always wanted to do,” said Metzer. “Now that I’m back on the farm it is exciting taking on this family tradition and creating a new dimension to it.”

That new dimension involves fresh duck egg sales under the sub-brand Olinday Farms, named after his late grandfather Olin Metzer, who landed in the Salinas Valley in the 1960s from rural Montana. Olin’s first purchase upon arrival? A badelynge of ducks.

No, he was not a quack, although everyone called him Doc — not for his medical prowess but for his knowledge of the language. He taught English to high school students in and around Gonzales, and extended those lessons to migrant workers on weekends.

In his spare time Olin tended to his large garden, with the help of his ducks, of course, who ate pesky snails and pooped in all the right places.

With the help of his son John, the proud owner of an ink-still-wet Animal Science diploma from UC Davis, Olin launched Metzer Farms in 1972.

Today it’s the premier waterfowl hatchery in the country, managing nearly 20 breeds of ducks (along with geese, some chickens and game fowl), selling and shipping live hatchlings to both hobbyists and meat purveyors all over the country. Each day USPS trucks haul away tens of thousands of barely waddling, fuzzy young ducklings inside carefully packaged containers.

Through a generational influence from Marc, the farm now utilizes technology in incubators and software to manage the orders. And now — following five years spent moving up the corporate ladder at Taylor Farms in Salinas — Marc Metzer has sensed a growing duck egg market.

The plan was for John to slowly retire and have his son gradually take over some of his duties. “Since then, we’ve bought a second ranch, doubled our hatching capacity, and created Olinday Farms,” Marc said. “Things aren’t going as initially planned but we are all very happy about it.”

Metzer has made it his mission — with the help of local chefs — to turn us all into duck-egg lovers. He has begun dropping off samples of Olinday duck eggs to local restaurants in Carmel, Carmel Valley and Monterey, and several have already added the eggs to their menus.

Jimenez calls Olinday duck eggs “real food, so natural and beautiful,” he said. “I love that they are not all the same exact color or shape.”

He appreciates that duck eggs have a richer quality than chicken eggs, with a higher ratio of yolk to albumen (the white part).

“Duck eggs achieve fuller, richer flavor with a creamy taste,” Metzer said. “They have a lower water content than chicken eggs, so they have a greater concentration of vitamins and minerals per serving and are more nutrient dense.” 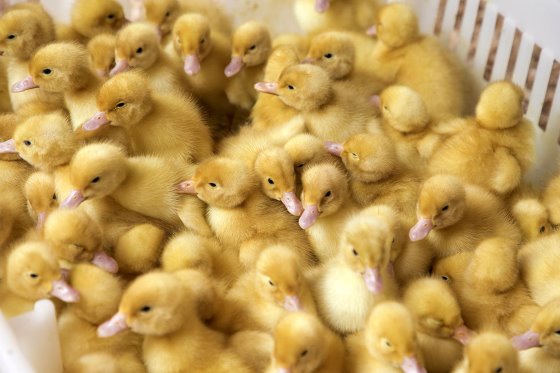 It’s an exciting era for the Metzer family from California who produce day old duck chicks and eggs that are shipped all over the US and Canada. Demand for duck eggs from the food and retail sectors is booming.

The Metzers are having to increase their annual production of one million eggs to keep customers happy. While the egg business is quite lucrative selling for up to US$ 1 per egg, there are also challenges and competing for labour with cannabis farms is one of the major difficulties.

There are two farms in the business and the first is Metzer Farms in Gonzales,‭ ‬California, which is the home ranch where the hatchery is located. The second unit, ‬Olinday Farms, is located in Hollister, ‬California. This particular farm site was a decommissioned turkey breeder ranch that the Metzers purchased and rehabilitated after it lay empty for‭ ‬ten‭ ‬years. It started full production just last year and is already performing well.

The Metzers keep around 15,000 ducks on their farms of multiple breeds. Photo: Chris McCullough

To introduce the family, John Metzer‭ is the owner and president of Metzer Farms‭ and his son Marc is the president of Olinday Farms and general manager of Metzer Farms. As Marc explains, the farms are performing well as a new found interest in duck eggs broadens out across North America. Marc said: “Olinday Farms in Hollister extends to 12‭ ‬hectares‭ and there are‭ ‬five‭ ‬poultry buildings on the site which is surrounded by fields that a local farmer uses to grow and harvest hay on.‭ Our farm in Gonzales is slightly smaller and is surrounded by leafy green vegetable fields. “We have‭ ‬20‭ ‬different breeds of ducks totalling‭ ‬15,000‭ ‬breeder and laying ducks and‭ ‬4,500‭ ‬breeder geese.‭ ‬Our main egg production duck strains are the Golden‭ ‬300‭ ‬and the White Layer.‭ ‬My father established these strains for high egg production about‭ ‬30‭ ‬years ago.‭ Our other breeders are used for meat production or for hobbyists,” he said.

Olinday Farms sells around 20,000 fresh duck eggs per week into the retail,‭ ‬foodservice,‭ ‬and food manufacturing markets.‭ ‬All of the ducklings and goslings produced by Metzer Farms are sold as one day olds immediately after hatching.‭ These are shipped via the mail or by air freight throughout the United States and Canada. When it comes to feeding the birds, Marc and his father have developed a close working relationship with a local fed mill. Marc said: “We feed our birds a corn based diet developed with a local family owned feed mill.”

He continues: ‘’‬I am concerned about rising feed costs,‭ ‬though obtaining labour is much higher on my radar. ‬We are competing for labour against an emerging cannabis market in California.‭ ‬In addition,‭ ‬the Silicon Valley is an easy commute from our farm so we are also battling sky-rocketing living costs.” “Our fresh duck eggs are sold to natural type food stores and tablecloth restaurants.‭ ‬We also sell eggs to companies which convert them to salted duck eggs for the California Chinese market.‭ ‬We sell over‭ ‬1.5‭ ‬million day old birds a year,” he said.

As with every poultry farmer around the world, protecting their flock from Avian Influenza is high up the priority list and more so for the Metzers who have already had a bird flu scare. “The majority of our birds are in barns which have chicken wire all around to keep wild birds out,‭” said Marc, “but allow wind to pass through the building to help keep the litter dry.‭” “When raising young breeders,‭ ‬we used to allow them access to an adjacent pasture but have stopped since the threat of AI. We also use the Danish entry system for all our barns to reduce risk of cross contamination going into the barn or leaving the barn.”

“In the past we found low pathogenic AI in one flock that we were allowing outdoors.‭ ‬This was found in our quarterly testing but the ducks showed zero sign of sickness and no increased mortality.‭ ‬This was an extremely scary situation for everybody working on the farm as we did not know the consequences,‭ ‬or if we would have to depopulate the farm.“‭ ‬Working with the California Department of Food and Agriculture along with the USDA,‭ ‬the Metzers were able to keep all their breeders and continue shipping our day old birds and eggs.

“Our m‬ain predators are foxes,‭ ‬coyotes‭ ‬and bobcats but we try our best to keep them out with plastic coated chicken wire and fencing,” Marc says. As with any business there are a number of challenges as well as opportunities and the same goes for Metzer duck farms. “Farming and hatching ducklings and goslings can be challenging at times because it’s a relatively small industry in the United States compared to chickens and turkeys.” He continues;‭ “‬We are constantly modifying equipment to fit our needs.‭ ‬In addition,‭ ‬because we have‭ ‬20‭ ‬different breeds of ducks and‭ ‬16‭ ‬breeds of geese,‭ ‬it is difficult to standardise or automate processes.

“Our main advantage is our knowledge and experience.‭ ‬We have been doing this for‭ ‬50‭ ‬years. And people come to us for information and trust us.‭ ‬With our sales history of duck egg layers,‭ ‬we know the fresh egg market is growing faster than ever in the United States.‭ ‬Chefs are calling us to order eggs,‭ ‬and farmers are putting in orders for‭ ‬25, 100‭ ‬or‭ ‬1,000‭ ‬females.‭ ‬We’ve never had so much excitement about duck eggs,” he said. According to Marc’s estimates, there are around ten million duck eggs produces in the US each year for resale.

The day old birds are purchased by other farmers and hobbyists. Photo: Chris McCullough 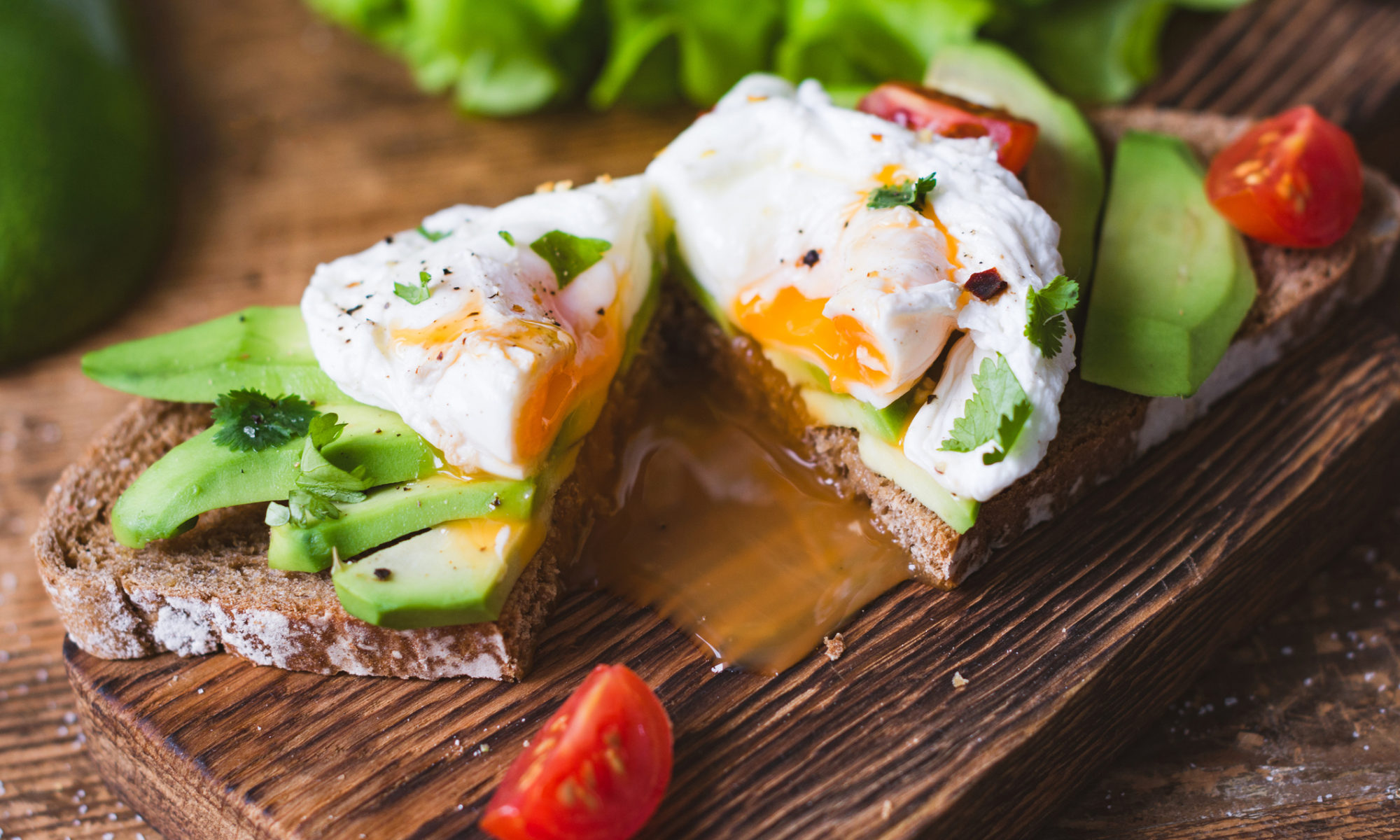 Throughout California, farmers and chefs increasingly work in partnership to support and bolster one another’s professions. For restaurant patrons, this behind-the-scenes collaboration opens their palates to new tastes. Such is the case at Fisher’s Restaurant & Catering in Hollister, where chef/owner Mike Fisher features an egg of a different feather: the duck egg.

Fisher began his culinary career at age 15 as a dishwasher in Hollister, his hometown. After working various positions in local restaurants, he attended Le Cordon Bleu culinary academy in Paris and worked across the U.S. in high-volume food service and a Michelin star restaurant. In 2016, lured by the region’s wealth of produce, he returned to Hollister to start his own farm-to-table restaurant.

“The Duck egg can do anything the chicken egg can”

“One hundred percent of our produce is purchased from local farmers,” Fisher said. “And we use as many other local products as we can—meat, eggs, dairy.”

And for his eggs, Fisher exclusively uses local duck eggs.“The duck egg can do anything the chicken egg can,” Fisher said, noting that though he originally added duck

eggs to the menu for their uniqueness, the “bigger, bolder, silkier yolk” won him over.Duck eggs have won over his guests as well.

“Lots of customers come in and their eyes light up. They say they’d love to try it,” Fisher said. “And (some customers) get a little scared at first. But I’ve never had anyone turn it away after eating it. They’re very impressed by it.”

One seriously rich yolk On Fisher’s seasonal menu, guests may find duck eggs hard-boiled and crumbled on a wedge Cobb salad or soft-boiled over grilled asparagus and red onions, drizzled with balsamic vinegar.