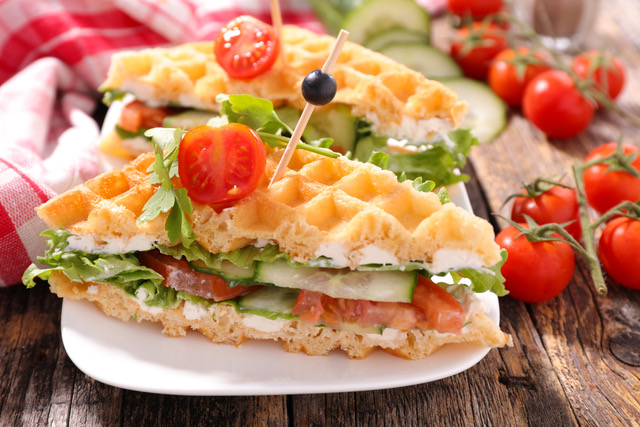 Heat the oven to 425°F and arrange a rack in the middle.

Arrange the bacon in a single layer on a rimmed baking sheet and bake until browned and crisp, about 20 to 25 minutes. Remove to a large, paper-towel-lined plate; set aside.

Carefully pour the bacon fat from the baking sheet into a heatproof measuring cup—you will need 1/2 cup. If you don’t have enough bacon fat, add the melted butter as needed. Reduce the oven temperature to 225°F.

Whisk together the flour, baking powder, and salt in a large bowl to aerate and break up any lumps; set aside.

Place the eggs in a second large bowl and whisk until just broken up. Add the milk and, while whisking, slowly pour in the bacon fat (or bacon fat–butter mixture) until evenly combined. Add the cheese and stir until combined.

Add the milk-cheese mixture to the flour mixture and stir with a rubber spatula until the flour is just incorporated and no streaks remain (the batter may have a few lumps); set aside.

Heat a classic (not Belgian) waffle iron to medium according to the manufacturer’s instructions. Fill it with batter, close the lid, and cook until the waffle is golden brown (when the steam starts to diminish from the waffle iron, you can open the top and peek for doneness). Transfer directly to a rack in the oven to keep warm. Repeat with the remaining batter until you have 12 waffles, placing the cooked waffles in a single layer on the rack in the oven.

Melt 1 tablespoon of the butter in a large nonstick frying pan over medium heat until foaming, about 2 to 3 minutes.

Swirl the butter in the pan until the bottom is evenly coated. Add 3 of the eggs, season with salt and pepper, and fry undisturbed until the whites are set and starting to brown on the edges but the yolks are still runny, about 4 to 5 minutes. (The egg whites will be fully cooked, so no need to flip the eggs over.) Remove to a large plate. Repeat with the remaining butter and eggs.

Spread the mayonnaise on half of the waffles and top each with a fried egg. Divide the tomato and lettuce over the eggs, top with the bacon slices, and close with the remaining waffles.

If serving immediately, cut each sandwich in half. To pack for transport, wrap the whole sandwiches in parchment paper, cut in half, and wrap again in more parchment paper.